The Project File (.wxml) provides a record of the settings and results for a 'Pooled & QMED Analysis' and therefore saves all the relevant settings and data for this method. Each Project File contains a single Site of Interest. You can save flow estimates in the Project File as part of a project audit trail and share these with colleagues or other users.

You can create project files by using File>Save or File>Save as..... Previous projects can be opened using File>Open Project.

If you open a Project File but do not have access to the original supplementary folder or edited data, sites that have been used in the analysis detailed in that project, which are identified as either edited or in the supplementary folder, will be available for subsequent analyses e.g. creating a new pooling group.

Additional sites, which may have been within the original supplementary folder but which were not directly used in the estimation methods, are not available for use unless the relevant supplementary folder is identified through either selecting to initiate a new Pooled & QMED Analysis or opening the Station Manager. On selecting either of these, a warning is presented highlighting that supplementary data was previously used in the project and that the identified folder cannot be found. You will be asked to identify this folder, provide an alternative, or continue without the additional data.

Details relating to any additional or edited sites are included in the Project File. On opening the Project File you are able to view the results of the previous analysis in full, whether or not any of the original edited or created sites are accessible. Note that if you complete further analysis (for example creating a new growth curve pooling group or QMED donor adjustment) without having the original supplementary folder this reanalysis uses the available stations in your Station Manager only. See Project File for more details.

The supplementary folder is specified at the initiation of a Pooled & QMED Analysis. You can select to 'Use supplementary data folder?' and browse to the appropriate folder. 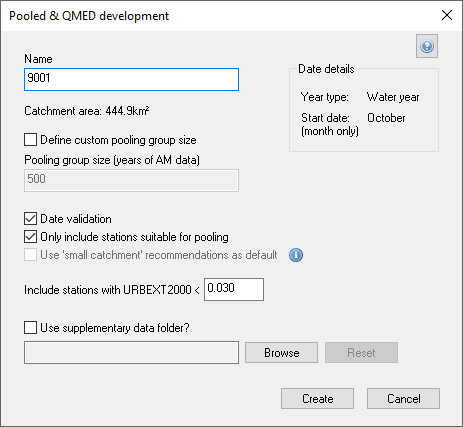 Sites used from the supplementary folder are highlighted with a + in the sidebar lists, the Pooling Group table, QMED Donor table and the Project Report.

This is illustrated below for the pooling group and QMED adjustment donor table, where a 'new' station has been created and added to the supplementary folder, based upon station 9001 and given a Unique site number of 900199. Note that if the station had been added to the supplementary folder with a site number of 9001 then this would be used in preference to the 9001 site from the NRFA Peak Flow Dataset (see notes on the Unique site number). 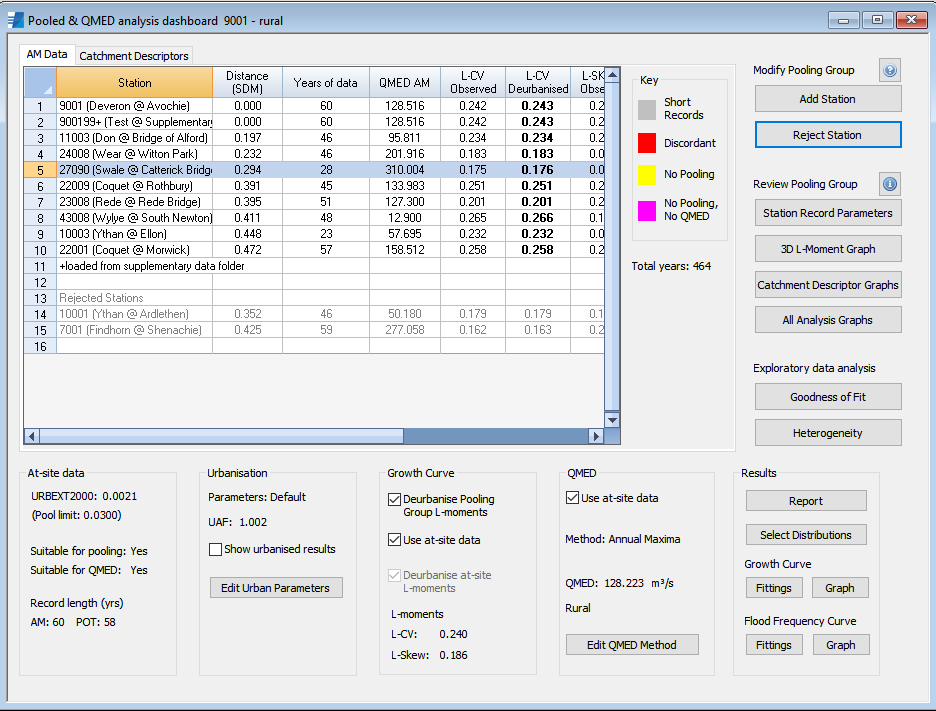 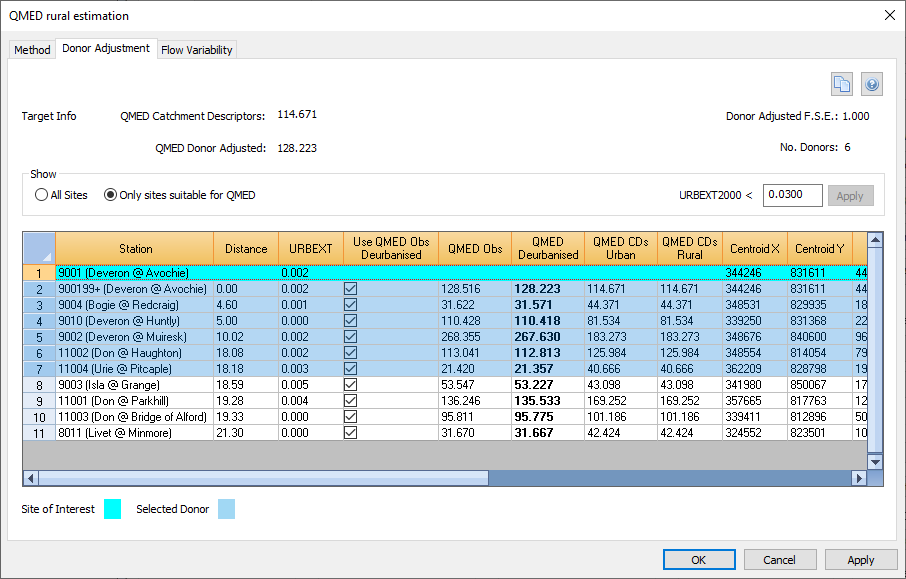 You are able to select a different supplementary folder by selecting the 'reset' button. It is only possible to have one set of stations in the Station Manager at any one time hence selecting this will results in all current pooling groups, project pooling group station edits and any previous project supplementary folder station data being removed.

A project report can be created from the Pooled and QMED Analysis dashboard via 'Report'. The report is saved as an html file, which can be opened in any browser, copied with formatting into a word document or saved as pdf (via the print facility).

The report is designed to act as an audit control for the flow estimate derived in the Pooled and QMED analysis. In addition to the final estimate of the QMED, growth curve and Flood Frequency Curve (FFC), the report includes: